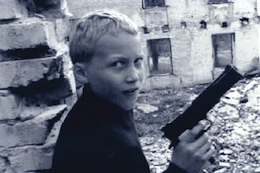 The Face of Ethnic Conflict: Revenge or Reconciliation in the Aftermath of War

Download the Event Brochure
Now well into the 21st century, intractable conflict is seemingly everywhere. Hostility. Death on a massive scale. Ruined cities. Forced migration. Wars from within and without. Is there a place for hope in such despair and devastation? Are we primed to aggress? To protect? Are we eternally doomed to be a world at war, trapped in its endless consequences?

Enter Allan King’s 1998 masterpiece, The Dragon’s Egg. King is recognized as one of Canada’s greatest documentary filmmakers. Unmatched for capturing the Unconscious on film, his “actuality dramas,” as he called them, are intimate, cinema verité observations, without interviews or narration, that influenced generations. Warrendale (1967), about a home for emotionally disturbed children, won the Prix D’Or at Cannes. A Married Couple (1969) was a ground-breaking exposé of modern marriage. Dying at Grace (2003) and Memory for Max, Claire, Ida and Company (2005) are captivating studies of aging and mortality.

The Dragon’s Egg captures psychoanalysis in action on a grand scale: in an attempt to understand and work through the intractability of ethnic conflict, a group of American scholars, led by the world- renowned Psychoanalyst Vamik Volkan, offers a charitable grant to a group of Russians and Estonians – if they can work together for a common goal. The film takes place in the Estonian village of Klooga, an abandoned army base left in a state of rubble after the collapse of the Soviet Empire.

One third of Estonia’s people are Russian, most of them put there by Stalin. As one Estonian says, “It’s like having a dragon’s egg laid in your nest: you wait in fear for it to hatch!” The Russians in Klooga are struggling to build a community with their Estonian neighbours. Estonians would rather not give them citizenship, residence or even jobs; they would rather they go home. But for these Russians, Estonia is home. Twenty Russians and Estonians in Klooga form a committee to build a community centre for their children. If they can work together, despite their mutual enmity, they will get $50,000 to pay for the project. The Dragon’s Egg chronicles the complex, funny and touching struggle of these brave people to create a new life together. Can they overcome their hate and the wounds of the past working for the common good? Or will the project collapse into rubble as well?

This year’s interdisciplinary symposium will explore conflict both within and between people; it will look at how psychoanalytic thinking about large group dynamics can bring about healing and reconciliation in the aftermath of war and will offer ideas about conflict prevention and peace-making.

In the morning session, attendees will view The Dragon’s Egg, introduced by Colleen Murphy, who was married to Allan King until his death in 2009 and now runs Allan King Films with their son, August. Our keynote speaker, Vamik Volkan, will discuss his involvement in the film and focus on the process of conflict resolution. Colleen and Vamik will relate experiences around the making of the documentary, with Colleen highlighting the therapeutic and problematic aspects of creativity itself, and both will describe what was learned in the process of the group relations initiative captured in the film.

The afternoon session will focus on the seeming intractability of conflict, the interplay of internal and external forces, how the lightness and darkness of humanity infiltrates ethnic group tensions. Endel Talvik will draw on his experience in the making of this documentary in outlining his understanding of group conflict and large group identity. Cyril Levitt will look at conflict in the individual psyche and at ethnic violence as drive derivatives and will bring for discussion some of Freud’s seminal thoughts, as outlined in Group Psychology and the Analysis of the Ego and Civilization and its Discontents.

Join us for a stimulating, evocative and timely, inter-disciplinary discussion.

11:55 am – Colleen Murphy in conversation with Vamik Volkan

This event is eligible for Section 1 CME credits (0.5 credits/hour). This event is an accredited group learning activity (section 1) as defined by the Maintenance of Certificate Program of the Royal College of Physicians and Surgeons of Canada, approved by the Canadian Psychiatric Association (CPA). The specific opinions and content of this event are not necessarily those of the CPA, and are the responsibility of the organizer(s) alone. As per the Royal College standard, each presentation provides a minimum of 25% interactive learning.

Refunds must be requested in writing two weeks prior to the beginning of the event, after which fees cannot be returned. A handling fee of $30 will be retained.

The Savoir of the Analyst

The Face of Ethnic Conflict: Revenge or Reconciliation in the Aftermath of War