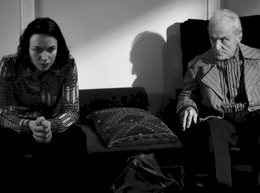 ** Preregistration is required ** DISTANCE PARTICIPATION ONLY ** – This course will be conducted online. Email psychoanalyst@bellnet.ca to rsvp. Registration deadline is one week prior to the meeting.

This proposed presentation is a cinematic screening of a clinical case. With realistic acumen, as well as artistic expertise, Adieu Lacan portrays the struggles of a young woman, Seriema, who is trying to understand why her path to motherhood has reached an unbearable impasse. Following two miscarriages and the possible loss of her marriage, Seriema travels to Paris in 1972 to undergo psychoanalytic treatment with the maverick French analyst, Jacques Lacan. Her analysis is an attempt to help her to disentangle the enigma of her question: why has motherhood become a seeming impossibility? Inspired by the story of Betty Milan, a Brazilian psychoanalyst and writer, it follows closely her own actual psychoanalysis with Lacan. Based on a book and a play, (Good bye, Doctor and Lacan’s Parrot), in which Milan recounts her analytic work, Adieu Lacan offers an insightful and accurate account of an actual psychoanalytic cure. The film presentation will be followed by discussions with the two presenters.

At the end of the session participants will be able to:

Richard C. Ledes, Ph.D. is a film director, producer and writer based in New York City. Richard has directed and produced a number of films including Fred Won’t Move Out, The Caller, and A Hole in One. His latest film Ikonophile Z, a light romantic comedy about the extinction of all life on earth, is currently in post-production. He is currently working on Vienna 1913, a feature film slated for production in the fall of 2021 and based on a play of the same name by the late renowned French psychoanalyst and playwright Alain Didier-Weill.

Mavis Himes, Ph.D., C. Psych. is a psychoanalyst in private practice in Toronto. She is also clinical consultant at Wellspring, a cancer centre for patients and their families. Author of The Power of Names: Uncovering the Mystery of What We Are Called (Row-man & Littlefield, 2016) and The Sacred Body: A Therapist’s Journey (Stoddart, 2002), she has published numerous articles on Lacanian psychoanalysis. Dr. Himes was director of the former Speaking of Lacan Psychoanalytic Group, a Toronto-based forum dedicated to the study of Lacanian, psychoanalysis. She is a member of Apres-Coup Psychoanalytic Association (New York).

This event is eligible for Section 1 CME credits (0.5 credits/hour). This event is an accredited group learning activity (section 1) as defined by the Maintenance of Certificate Program of the Royal College of Physicians and Surgeons of Canada, approved by the Canadian Psychiatric Association (CPA). The specific opinions and content of this event are not necessarily those of the CPA, and are the responsibility of the organizer(s) alone. As per the Royal College standard, each presentation provides a minimum of 25% interactive learning.